ICF Pacific Chapters present: You CAN Change Other People: The Four Steps to Help Your Employees, Colleagues – Even Family – Up Their Game 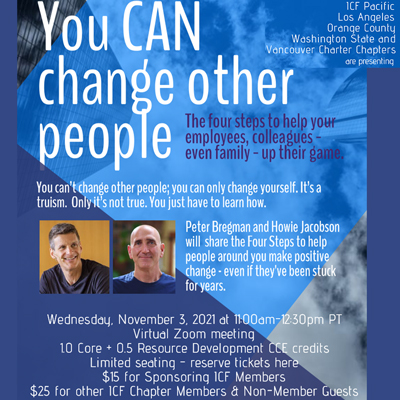 Topic: You CAN Change Other People: The Four Steps to Help Your Employees, Colleagues – Even Family – Up Their Game

Location: Virtual meeting via Zoom.us / Your link to join the conference will be sent after you register.

You can’t change other people. You can only change yourself.” It’s a truism. Only it’s not true.
In fact, if you’re a leader or a manager in an organization – if you’re a coach – you have to change other people. It’s your job. If you’re a parent, it’s your job too. And if you care about the people in your life who aren’t reaching their potential or, worse, are acting in self-destructive ways, it’s your longing.
The problem isn’t that you can’t change other people, the problem is that the things you do and say to try to change them don’t work because you’re doing and saying the wrong things. In fact, most likely you’re having the opposite effect.
What does work? That’s the focus of this session. We’ll look at the 4 fundamentals that need to exist for people to make sustainable change, and we’ll share the Four Steps – the straightforward, methodical, and replicable process for reliably helping other people change

Takeaways from this event:

Peter Bregman is the CEO of Bregman Partners. He coaches, writes, teaches, and speaks, mostly about leadership and also about life. His sweet spot is as a strategic thought partner to successful people who care about being exceptional leaders and stellar human beings.
Peter is recognized as the #1 executive coach in the world by Leading Global Coaches. He coaches C-level executives in many of the world’s premier organizations, including Citi, CBS, Mars, Showtime, AMC Networks, Allianz, Electronic Arts, Pearson, and Twilio, to name a few. He is also a ski coach on the weekends in the winter (but definitely not the #1 ski coach in the world).
Peter is the best-selling author of five books including Leading with Emotional Courage and 18 Minutes. His work appears frequently in Harvard Business Review, BusinessWeek, Fast Company, Psychology Today, and Forbes. He has also been featured on CNN and NPR.
Peter created and leads the #1 leadership development program in the world, the Bregman Leadership Intensive, and trains leaders and managers on the Four Steps through the Bregman Leadership Coach Training program.
Peter is the host of the Bregman Leadership Podcast, with over 1.5 million downloads. He has given four TEDx talks and regularly delivers keynotes for associations like SHRM and companies, including Coca-Cola, the Discovery Network, L’Oréal, Deloitte, and Fidelity, among others.
Peter earned his M.B.A. from Columbia University and his B.A. from Princeton University.
Peter lives in New York City with his wife, three kids, and new puppy, Maeve (his first dog ever). He reads, runs, skis, bikes, hikes, and tries to follow his own advice.
He can be reached at www.bregmanpartners.com.

Howie Jacobson, Ph.D., is an executive coach to clients ranging from startup founders to established and rising Fortune 100 leaders. He is director of coaching at Bregman Partners and head coach at the Healthy Minds Initiative.
Howie is the author of AdWords For Dummies; coauthor of Sick to Fit and Use the Weight to Lose the Weight, with Josh LaJaunie; contributing author to Whole: Rethinking the Science of Nutrition and The Low Carb Fraud, both by T. Colin Campbell, Ph.D.; and Proteinaholic by Garth Davis, M.D. Howie’s writings have also appeared in Fast Company and Harvard Business Review.
He hosts the Plant Yourself Podcast, where he interviews remarkable people engaged in healing at the individual, institutional, and planetary level.
Howie earned his M.P.H. and Ph.D. in Health Studies from Temple University and his B.A. from Princeton University.
He lives in rural North Carolina with his wife, where he writes, gardens, plays Ultimate Frisbee, runs, fiddles, and loads the dishwasher correctly.
His mission includes helping kind and generous people grow their capability and scale their influence, sharing the joys of a healthy life, and reintroducing people to their most authentic, best selves. He can be reached at www. askHowie.com